Is the Bible unknown to the Qur'an? 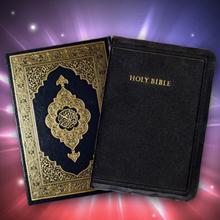 When Christians use the testimony of the Qur'an in support of the Bible's integrity, some Muslims argue that the Qur'an does not relate to present day versions of the Torah and the Gospel. They say that the "Scriptures", which Christians and Jews had at the time of Muhammad (571 - 632 CE), were different from those available today. That the Jews of Muhammad's day were reading a different Torah, something which was "certainly not identical", "nor resembled anything like the Old Testament" which contains the reports, stories and myths of groups of people gone by. Similarly the Injil (Gospel) was "not at all identical with the New Testament or even the four gospels" available to us today (Izzat Khan and Abu Abdullah, Divine Revelations, The Muslims and the Bibles: A Clarification, pp. 4-6).

It is stated that when the Qur'an talks about a single book known as the Gospel (as given to Jesus) and a single book as given to Moses (known as the Torah) that they were not the four gospels as we find them in the New Testament nor the first five books of the Old Testament known today as the Torah. To conclude the matter, such Muslims add that even the title "Bible" for the Scriptures of the Jews and Christians is foreign to the Qur'an.

Any good dictionary will explain that the word Bible is derived from the Greek word biblia (neuter plural), which means "books". As the collections of Jewish and Christian texts came increasingly to be considered as one unit, the term in Latin began to be understood as feminine singular, denoting "The Book". The same word has come through to Modern English in words like bibliography. So when the title Bible, the book, was used, it denoted a collection of writings or books of the Christian and Jewish Scriptures.

It is indeed true that the title "Bible" is not used in the Qur'an nor does it contain the proper title, "Bible" for the scriptures of the Jews and Christians but has identified it as "Kitab" (the Book) by calling the followers as "Ahlal Kitab", the people of the Book. Although, the Qur'an has borrowed many foreign terms and names like Tawrat, Furqan, Injil, Isa and Musa etc.; and Arabized them into its text, when it came to using the word Bible, it used its own Arabic words derived from Hebrew and Aramaic, thus calling the Jews and Christians "Ahlal Kitab", the people of the book, and referring to their scripture not only as "the book", Kitab, but also listing the parts of it as the Tawrah, Zaboor, Injil and Sahaif (Torah, Psalms, the Gospel(s) and the books of the prophets respectively).

Therefore the notion that the Qur'an does not mention the Bible is simply wrong. It will be like saying that the Qur'an does not mention "God". The Muslim listener will refer to many verses where Arabic words like "Allah" or "Rab" are mentioned. If those words stand for God in the Qur'an then it should not be difficult to recognise that the words Ahlal Kitab stands for Jews and Christians and their Kitab stands for their scriptures - the Bible - in the contexts as referred to them in the Qur'an.

Torah and the Injil

Some Muslim writers contend that the original Pentateuch and the original Gospel have disappeared and became extinct from the world. For example, the late Rahmatullah, whose writings are still prominent among Muslim readers, expanded this claim by asserting, "We strictly deny that the original Torah (Pentateuch) and the original Evangel existed at the time of the Prophet Muhammad and that they were not changed until later." He added further by claiming that, "The present gospels, chronicles and epistles are certainly not the Evangel referred to by the Holy Qur'an and so they are not, as such, acceptable to the Muslims."(Rahmatullah, Izharul Haqq, Part III, p.30-31)

Similarly, Yusuf Ali, whose translation and commentary is popular among Muslims in the West, claims that "the Injil (Greek, Evangel = Gospel) spoken of by the Qur'an is not the New Testament. It is not the four Gospels now received as canonical. It is the single Gospel which, Islam teaches, was revealed to Jesus, and which he taught. Fragments of it survive in the received canonical Gospels ..." (Yusaf Ali, The Holy Qur'an, p.292, (Saudi Arabian Edition, p.334)

Christians believe there is indeed one Injil, brought by Jesus, the Christ. The word Injil in Arabic is a transliteration of the Greek Evangelion as Yusaf Ali has rightly mentioned in his statement. The Greek word Evangelion means "happy message" or "good news". Distinguished Muslim commentators like Baidhawi and Zamakshari openly admit that Injil is not an Arabic word but is derived from the Syriac and/or Greek word Evangel - the Gospel, the good news. Taking this as true, one should look no further than among those who have been using this term for their scriptures in Muhammad's time and even before then. When we look at the documentary evidences available to us even before Muhammad, it can be concluded that a long time before Islam started, these titles were used for the collection of the Judaeo-Christian scriptures as available today.

If the Gospel and the Torah spoken of by the QurÕan are not the same as the Old and the New Testament (known also as the Injil and Tawrat among millions of Arabic, Farsi, Urdu and Turkish speaking Christians) and did not exist in the same form as in Muhammad's time, then what was the Qur'an referring to? Why did the Qur'an require Christians and Jews to accept the Old and New Testament of Muhammad's time? Why did the Qur'an tell the Jews and Christians to follow their scriptures if they were not yet in existence or were only available in corrupted versions? If a Muslim is to believe in the integrity of the Qur'an then he has also to believe that in Muhammad's time the scriptures of the Jews and Christians existed and that the Qur'an certified their message by saying that they contained guidance and light (Surah 5:47,49). If somehow the author of the Qur'an was doubtful of the integrity of the previous scriptures, why does it ask both Jews and Christians to follow them in their decisions?

In the light of the available evidence of manuscripts (both incomplete and whole), it can be said with certainty that the Old and the New Testaments of Muhammad's time were exactly the same as available today. Today's Bible translations are based on existing manuscripts that go back even hundreds of years before Muhammad's day. Hence the logic of the Qur'anic verses immediately is that the Injil and Torah as mentioned in the Qur'an are the same as those available to us today in the New Testament and Old Testament of the Bible.

In Judaism, there is a book called "the Pentateuch" or "the five books of Moses" which are identical to those in the Bible. These books contain the major part of the Jewish law and are known as the Tawrat/Torah/Law. However, Jews often use the same term to describe the whole collection of books, which Christians call the Old Testament. It is interesting to read in a tradition of Islam that the Torah read by the Jews of Madina also included the book of Isaiah, which indicates that the Qur'an was referring to the whole collection of the Jewish scriptures with the word Torah and not just what was revealed to Moses. (See, for example, the Islamic tradition transmitted by Bukhari, Darimi and is available in Mishkat al, Masabih, Vol. II, p. 1232).